It was another week of stress for me.

After a three-day week-end, I was actually ahead of my reading for about five minutes.  I started reading the first of the three chapters for this week, last Tuesday, even though we hadn’t actually tested on, or had class about the last three chapters.  I finished reading that first chapter on Wednesday at work and gave myself a break on Wednesday night after class.  Thursday, I didn’t have any time to read at work which was fine because I had Thursday night and a good portion of Friday, Saturday and Sunday to finish.

Shortly before I was going to leave on Thursday evening my boss came into my office and in a hurried tone asked me if I had a radio.  He had been on the phone with one of the other Facility Managers in town whose office faces west and she told him, “I think I just saw an explosion… Kinda looks like it might’ve been at the airport.”  We went to the opposite side of the building, here on the 23rd floor and looked out and sure enough there was a very visible fire raging across the bay.  I tried to find out what had happened by way of my usual sources (i.e. Twitter) but there was nothing to be found.  The local TV stations websites didn’t have any news yet either.  I had to go to the store before going home and by the time I got home (and sat down to eat the Popeye’s Chicken and Biscuits I did not need but didn’t resist) and turned on the television to find out what happened every station was teaming with coverage of this: 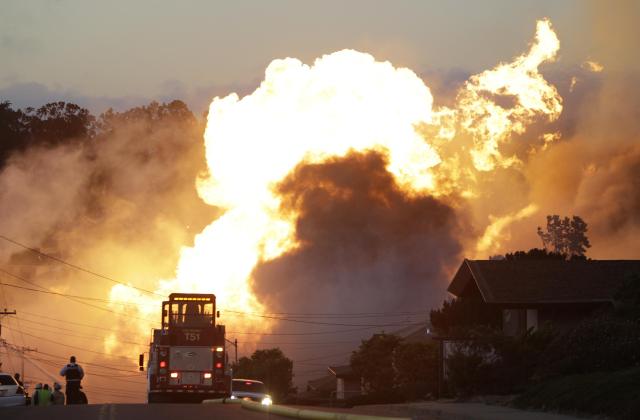 “The San Bruno Fire” raged for hours as a 30″ natural gas pipeline, fifteen feet underground ruptured and exploded, blowing an enormous hole in the ground and sending a massive fire-ball more than 100 feet into the air.  The flames incinerated a few homes immediately around the rupture and the fire spread out over a ten-acre area burning 38 homes to the ground and damaging 120 more.  The number of deaths varies depending on the source of information but I have heard at least 6 people dead either at the scene or in the hospital due to injuries.

I was glued to the television and even as I was telling myself,”They’re not giving out any new information.  You’ve got reading to do.  You need to turn this off and get busy.”  I sat and stared at the television for four hours watching in morbid fascination and with rapt curiosity for any new information that might come.  Finally a little after midnight, I gave up, turned off the TV and went to bed having made no additional progress on my reading.

The additional two chapters I needed to read were about Respiratory and Cardiac Emergencies.  I did my usual routine of reading the chapters, working through the pages of the workbooks and listening to the Audiobook repeatedly, just hoping to some how osmosize the information contained within and I went into class last night, knowing we would take tests on all three chapters and feeling exceedingly uncertain about my level of knowledge and ability to pass the tests.

With his usual flair of disorganized inadequacy, the instructor arrived at class with not enough copies of the tests for each of us, so he split the room down the middle and told us “everyone on this side” his left “take the chapter 10 test.  And everyone on this side” his right, where I was “take the chapter 11 test.”  I took the test and pretty well whizzed through it.  I left a couple of questions blank because I wasn’t sure of the answers, and wasn’t sure how much time I had to take the tests and didn’t want to spend too much time mulling those over thereby not allowing enough time to answer all the ones I knew for sure.  Then I went back and completed the ones I left blank.  I didn’t feel like I was absolutely certain of the rightness of my answers, but for the most part I didn’t have to sit and rack my brain for them either.  When I finished, I turned in that test and picked up the Chapter 10 test.  I went through that one just as quickly and with the same strategy.  I finished that test, turned it in and sat down, marveling at the fact that despite my lack of certainty, I seemed to be one of the first people finished and now I could relax.

I often wonder how these things happen.  I am such an auditory person that I actually struggle with tests when people are in the room talking (as frequently happens in this class) so there is no chance that I just missed them talking about it.  No one said anything about Chapter 12, yet many of the students had turned in their first two tests and picked up Chapter 12.  How does that happen?

Anyway, I picked up Chapter 12 and realized there were 76 questions on this test.  The other two had been 25 and 40 questions.  So not only did I waste ten minutes of prime test taking time, but I wasted them for the longest test we were taking.

Eventually students began finishing with and turning in the last test and things were getting a little more disorganized.  The instructor told us when we finished with all three tests to go take a break so he could tell who was still testing.

My strategy unchanged, I finished the test fairly quickly and with only a modicum of confidence; confident I had passed every test, less confident that I did “well” on them.  After a time, all the students were in the hall and the instructor came out of the classroom.  He called us all together and told us that for the tests that had already been graded by his TA’s (Chapters 10 and 11) our scores had pretty much sucked.  That’s a quote.  “You guys pretty much sucked.  The scores sucked.  They were bad.”  He said he was forced to conclude that either the instruction was bad (Ya Think!?!) or the students were bad.  But to his credit he claimed to assume that it was the instruction.  He also said that it seemed clear that many students weren’t reading their books.

He said we were going to go back in the room and go through the Chapters 10 and 11 tests and we’d go over the chapter 12 test on Wednesday if there was time.  I was glad for this because we haven’t gotten any feed-back or scores from him to date and I wanted to know how I did.  Plus if I “sucked” I wanted to know how badly and on which questions or points.

So we sat down and he re-distributed chapter 10 so we could go through it in class.  Because of his disorganized inadequacy we only got through one of the tests and it took more than an hour (making us 30 minutes late getting out of class, again!)  I pulled out a piece of paper and wrote down “Chapter 10” so that I could make note of what I missed since I knew we weren’t going to get our answer sheets back.  When we were finally finished going through the test I wadded that piece of paper up and threw it away.  Why?  Because the only thing I had written on it was “Chapter 10”.

I was so stressed all week studying for this class.  I was anxious all day and during class about the tests and hoping that I could remember the right information when it mattered because I couldn’t think straight about any of it…

OK, that’s technically not true.  There was one question in the “Critical Thinking” section that I officially got wrong.  I got it wrong because answers B, C and D were all correct so I wrote all three down.  I knew that he was probably looking for answer B, but in my “critical thinking” answers C and D came before answer B and I would have completed the steps in that order in the real world.  I wanted to show that I understood the whole process and that I would have done them in that order.  And, in my stressed state, I wasn’t 100% sure I wasn’t over-analyzing what he wanted and that in fact C or D were the correct answer.  I fully expected to have that question marked wrong because I gave three answers.  And I know it was marked wrong because the TA questioned me about it.

But!  The instructor says he likes it when his students challenge him because “it means you’re trying to learn”.  I told him, I was only challenging this because it’s the only one that was marked wrong, therefore if he gives me credit than I’ll get 100% (which will probably never happen again) and since it is the “Critical Thinking” section it’s somewhat subjective.  He told me to come see him “during office hours” on Wednesday, the hour before class starts, and we can talk about it.

Of course how did on the other two I have no  idea, but if the first one is any indication, I did better than I thought.

Now if you’ll excuse me, I have to get home, and get started on Chapter 13.  I’ve only got six days to learn three new chapters of information and time’s awastin!