It is, of course, never a good thing, when a family member gets sick and needs to be cared for.  But sometimes something good can come from such a situation.  We’ve probably all seen a movie or two about a character returning home to care for a sickly parent and finally finding a way to heal a relationship or themselves.  I admit that perhaps watching some of these movies may have influenced my assumptions or expectations about what would happen when I went to Tulsa to care for my mother.  It’s true that I had an idea in my head about being there and having her being terribly ill and in need of care and therefore being completely dependent on me.  And it’s true that I imagined having a storied experience of healing with her.  And I got my healing, in a way very different from what I expected but no less valuable.

Other good resulted from this trip as well.  Due to the relationship with my mother, I hadn’t been back to Tulsa in five and a half years which means that the only chance I ever had to spend time with Heather, my dearest friend was when she came to California on her annual Thanksgiving pilgrimage out west to visit her Grandparents.  Since I was in Tulsa, to take care of my mother, I was afforded the opportunity to visit with Heather as well.

The first night we got together Heather, her fiancée, Joe, and I went to a local Tulsa eatery called Zio’s.  It’s the quaint little Italian restaurant on one of the main strips in town.  Zio’s has been in Tulsa for close to fifteen years and I used to eat their frequently before I moved away.  It was at Zio’s that I was introduced to a dish called Spaghetti Half & Half.  It’s incredibly simple being nothing more than a bowl of spaghetti pasta with both Marinara and Alfredo sauces poured side by side over the top.

This was always my favorite dish at Zio’s and I have craved it many times in the ensuing years.  (I’ve made it myself at home a couple times but it’s never the same.)  Imagine my horror, then, when we sat down at the restaurant and I opened the menu, only to find that it no longer includes “Spaghetti Half & Half.”  Fortunately, they have a “create your own” option now; select your pasta, select your sauce and if you want it, select your meat.  Let me just tell you, adding chicken to this dish does not improve it one bit.  Oh well.

After dinner, we went back to Heather’s house and watched a movie.  Joe had mentioned Borat and Heather mentioned that she’d only seen a little of it.  I had never seen it at all, and now that I have I wish I could still say that I haven’t.  That’s the problem with bad movies, you don’t know they’re bad until you’ve already seen them and try as you might, some things can not be unseen.

The next time I got to hang out with Heather, it was just the two of us.  Joe went camping, claiming he wanted a little “alone time” and then proceeded to text and e-mail Heather every half hour or so.  Heather showed me around her studio (She’s a massage therapist – something from which I’ve never benefited) and then we went to dinner at another restaurant in Tulsa called Cosmo.  It’s a cool little joint that reminded me quite a bit of some of the coffee shops and such that I hung out in when I was in college.  The menu was unique and the food was tasty.  After that we went back to Heather’s house and watched “Yes Man” (where I got my inspiration for my other blog).  Afterward we sat and talked for a couple hours.  It was so nice to sit and have a mature, rational conversation with someone who doesn’t always see things exactly the same way I do, but is interested in hearing my perspective anyway.

I really treasure these times with Heather.  They don’t happen nearly often enough.  I’m afraid now that she’s getting married they may happen even less frequently.

And then there’s this.  I wrote this post, also on my previous blog in January of this year.  When I think about it, my heart breaks just a little bit…

It was my plan to write today about happiness.  How sometimes, happiness is a choice and one that can be very hard to make and how frustrating it is to have to make that choice over and over again.  That was my plan.

I just got some news that upset that plan and, of course, me.

I’ve written in the past about my dear friend, Heather.  I met Heather when I worked in retail 12 years ago.  I liked her and enjoyed our friendship but some things happened along the way that for a time we weren’t as close as we once had been.  When I moved to California, I assumed I’d never see her again, indeed, I never thought I’d speak to her gain.  I don’t think I realized then, that her grandparents live in the bay area and she has a long-standing tradition to come to the bay area to visit her grandparents the week of Thanksgiving and when the time came for her to come visit the first year I was here, she contacted me and invited me to come hang out.

I was really glad she did, and with the trappings of our previous work relationship, and with all the rumor and hushed conversations of others out of the way we had the opportunity to really grow in our friendship and our love for each other.

Earlier today, I logged on to Facebook (evil site that it is) and found that I had been “tagged” in a note by Heather.  I looked at it to find that it was one of those “25 random things about me” lists.  (Random thing about me #1:  I’ve been dreading being asked to complete one of those!)  As I read her list, I noticed that number 15 said this, “My mother and I have an amazing relationship, I die a little inside knowing I have less than 12 months to spend with her before she moves to the west coast.“

“Awesome” I thought, “Now maybe she’ll make more trips out here and I’ll get to spend more time with her.”

Heather told me years ago that her mother was planning to retire to the Bay Area so she could be close to her parents.  I always secretly hoped that Heather would move with them, or shortly after them, and we could be close again.  A few years ago Heather’s mother took a huge hit when the stock market faltered and she lost a significant amount of money.  Apparently, that’s when they decided to move west, but some place a little less expensive.  So today, I asked Heather about this:

Self:  So I didn’t realize your parents were going to move here so soon. Where are they going to live?

Heather:  In Portland, OR or Vancouver, WA.

Self:  Oh. I thought they were moving here.

Heather:  No.  And, my Grandparents are even moving up to Portland or Vancouver, too.  So this Thanksgiving will be the last time I head out that way

Heather: Yup.  So I’ll get to see you in Feb and in Nov and that’s that for awhile. 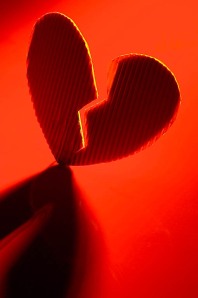 This is tragic!  My heart is absolutely breaking!  I don’t know what my life would have been like without her in it.  I don’t know if she had any real impact on my existence, other than to have been the one person I knew I could come out to and know there’d be no negative repercussions.  But I know that these brief, and few and far between, visits that we’ve shared over the last 11 years have meant the world to me, and they’ve been the life’s blood of our friendship.

I feel like our relationship is ending.  Is that silly?  I mean, in this day and age with Instant Messengers, and Facebook and iPhones with text messaging, is that silly?  The problem is, I’m doing what I always do.  I’m thinking about this a few steps ahead.  Yes, I’ll see her, however briefly, when she comes out to visit next month, and I’ll see her again very briefly in November.  The visits will be fun, but they’ll go much too fast, and there will be a cloud over them.  And in November, when she walks me to my car (if she walks me to my car) and hugs me and says good-bye.  It will be for the last time.

I haven’t been to Tulsa in five years.  My sister and her family have moved to New York.  I’ve lost touch with all of my other friends besides Heather.  I love my Mother, but I can’t stand to be around her for long.  Going back to Tulsa, really isn’t in the cards.

Ultimately, I’m only a very small part of Heather’s life and I don’t fit into the rest of it.  I’ve met her boyfriend twice, but I don’t know him, I’m not completely comfortable with him and I don’t think he’s completely comfortable with me.  I’ve never met his two children but I know they’re troublesome and I don’t really feel like I should be involved in that.  And despite the way I speak of Heather, we don’t really have the kind of connection where I would be welcome and convenient as a part of her every day life, however briefly.  Therefore, going to Tulsa, with the purpose of visiting her doesn’t seem likely.  And even if I did, I couldn’t get away with being there and not seeing/visiting/staying with my mother.

So, I’m doing what I always do.  I’m thinking about this a few steps ahead and what I see happening is, our interaction will dwindle.  Heather is never on Instant Messenger any more.  Occasionally, I talk to her via the chat function of Facebook, but it’s not very convenient and it’s very infrequent.  We exchange one line comments and topics on Facebook but it’s all very superficial.  We don’t spend much time on the telephone.  And text messaging is no way to carry on a conversation.  Soon it’ll be nothing but comments on each other’s Facebook activity.  I don’t imagine I’ll ever see her again. 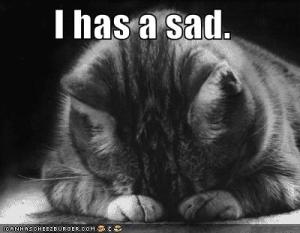 It is at a moment like this, when I’m faced with difficulties and sad things that are not within my control, which really aren’t about me, that I remember just how much of an effort it is, how much hard work it takes to be happy and at this moment, I can’t put forth the effort it requires.