If you read my previous post in its entirety, then you are:

a) a glutton for punishment

b) a good, good person and friend who is worthy of much praise

c) thoroughly entitled to the true-er version of the story

d) all of the above.

And if you didn’t read my previous post then this whole story is new to you, although, really!  Don’t be rude.  Go back and read it.  Go ahead.  Go now! I’ll wait.

So Aisha Tyler and I are not really BFFs and in fact she probably won’t remember me the next time she sees me, and there will be a next time.  But she might.  Since I’ve changed my twitter profile picture to the picture she and I took together every time she reads one of my tweets she should get a look at me.

I’ve been a fan of Aisha’s since she was on Friends and there’s really no explanation for my fandom since then other than she just is damn funny!  The first time I saw Aisha perform live she was very relatable and though I did not go and talk to her after that show I did observe her talking to others for a moment on the way out and she was just very gracious and kind to everyone.

Anyway, it’s true that Michelle and I went to see Aisha Tyler at Cobb’s Comedy Club in San Francisco, a year or so ago and had a chance to talk to her after the show.  She told us that she left Ghost Whisperer because she had some other big projects coming up in the following year and there just wasn’t enough time for it all.  We told her we missed Andrea, but we were glad Aisha left for good reasons.

I bought a copy of her book Swerve: Reckless Observations of a Postmodern Girl and as a result of our conversation she wrote the inscription shown here:

Andre Says ‘hi’ from the great beyond… (SF)

She was very sweet, as always, and Michelle and I walked back to the car talking and laughing about the show.  I looked again at the inscription on the page and I thought, “Your shirt rules!”  When I’m 60 and senile, I’m not going to have any idea what that means.  I should have had a picture taken with her to keep with the book.

A couple moths ago, when I discovered Twitter, it didn’t take me long to start searching for celebrities and along the way I found Aisha Tyler.  It was clear it was really her and not someone impersonating her, and (probably) not a “ghost tweeter”.  I followed her and she truly was one of the first celebs to follow me back.  She was the first celeb to reply to something I said to her.

We have tweeted about Lost and…  Well, she’s tweeted about Quantum Mechanics, Video Games and Date Shakes, and I’ve made lame attempts at dialoging with her on subjects about which I know nothing.  I pestered her relentlessly (for a day or two) about getting her music video Nowassitall in an iTunes compatible format.  I had no problem finding a downloadable version of Aisha Tyler is Lit: Live at the Filmore, but I had purchased the DVD and only wanted the music video on my iPhone.  Still haven’t figured this one out so if anyone can tell me how to get just the music video, please send me an e-mail!

When she announced her San Francisco Tour dates she also offered a contest to win a couple tickets and she sent me a direct message on Tuesday to inform me that I had in fact won tickets to the show.  I did not know until arriving at the club that there were reserved seats for us as well.

Michelle and her sister, Monique, came to the show with me.  Neither of them tweets and so they don’t understand the twitter phenomenon.  So when I said “My friend Aisha Tyler gave me two tickets to her show on Thursday,” they laughed at me.  They said they wanted me to introduce them to “my friend Aisha Tyler”… So I did.

We waited till the crowd had thinned and the line was dwindling and we got ready to go talk to her.  I pulled out my iPhone to ready my profile picture, that of my cat Mischa. We ended up being in line behind a very drunk couple where the wife was determined to ask Aisha, “What is the swirly thing?” and it was a testament to Aisha’s graciousness when she simply smiled at the woman and said, “You know what the swirly thing is!”  If you don’t know about “the swirly thing” you must immediately acquire a copy of Aisha Tyler Is Lit: Live at the Filmore, watch it, love it, lather, rinse and repeat!

When the drunk couple left and we were next up, I walked up to the table and said to her, “Aisha, my two lady friends here have asked me to introduce them to you, because they do not believe that you and are close personal friends.”

Without missing a beat, she turned to Michelle and Monique and said, “Oh yeah!  We go way back!”  See?!? Totally gracious!  No idea what I was talking about but played along and acted the part!

I proceeded.  “See we are friends of sorts.  On Twitter anyway,” and then I showed her the picture of the cat and without hesitation she said, “Oh!  Riggledo!” and I must say her enthusiasm seemed to be honest and genuine!  Even if the enthusiasm was acted, I did not identify myself to her, so she genuinely recognized the picture!

I told her how much I appreciated her picking me and she said that with all the tweets we’d exchanged she couldn’t not pick me.  And then she turned to my friends and said, “He’s been so excited.  He’s been on the computer all day saying ‘five hours till Aisha Tyler’, ‘four hours till Aisha Tyler.’ I was like, ‘Do I need extra security?’”  She then said, “It’s kinda funny, and don’t take this the wrong way, but because your picture was a cat, I thought you were a girl for a while.”
I told her it was because I didn’t photograph well and I didn’t have any good pictures to post and promised that I’d replace the picture (which I did today,) with our picture.  And that’s when I read the inscription on the DVD cover she’d signed for me.

What’s up with the kitty kat?

The last thing was that I made a point of wearing the same shirt so that I could have my picture taken with her to take care of that pesky 60 years old and senile problem! 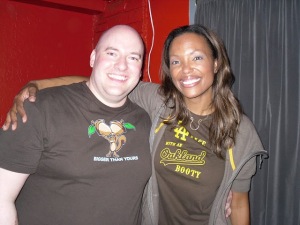 So you see, it’s true!  Aisha Tyler is my close, personal – Well, we’ve met a couple times and I think I can safely and fairly call her “friend”

Thanks for reading.  No clean up required this time around!

6 thoughts on “And Now, The Rest of the (Aisha Tyler) Story”