Speaking of sentimental and thoughtful gifts…

Karin walked into my office today and handed me a small blue tube-box with sparkly blue ribbon tied around it and said, “I wanted your book to be published.”

Karin is one of my biggest supporters, as far as my writing is concerned.  We’ve talked at length about my book, tentatively titled, “The Teacher”.  She’s only seen what I’ve posted here on this blog, plus one additional chapter.  She’s chomping at the bit to read more and I get no small amount of pleasure out of tormenting her by dangling tidbits in front of her but not letting her see the rest.

It is thanks to Karin and people she knows, who know people, that I am going to be attending he writers workshop/class/group/thingy in February that I hope will give me greater insight into my writing ability, this book and the industry in general.  I’m treating this workshop (or whatever it is) as a step in the process to publication.  I hope that turns out to be true.

Anyway, Karin is a huge supporter and she wants to see my book published, which led her here.

I opened the blue tube-box with sparkly blue ribbon tied around it and turned it on end.  It’s contents slid into the palm of my hand, wrapped in simple tissue.

Karin found a store on Etsy.com that makes these: 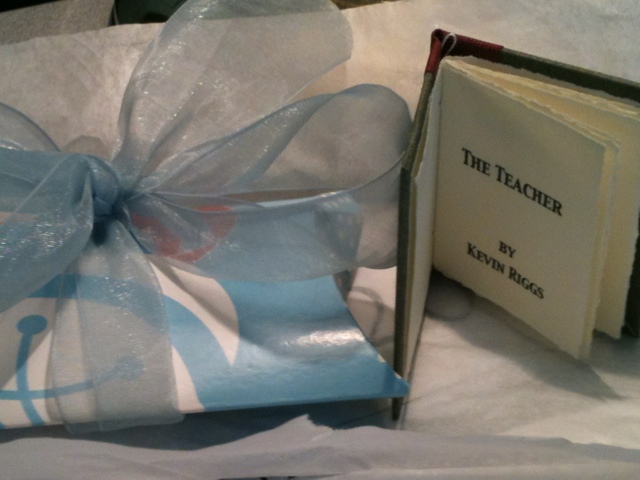 It’s a Christmas tree decoration, about the size of a matchbook, with a cover page (I guess it has to be titled The Teacher, now!) and the first sentence of my book printed inside, and it is bound, hard cover.  I love it!

And it gave us an idea.  Somewhat accidentally, I began work on my second novel, (I know, go figure!) yesterday.  Perhaps, I can get one of these ornaments made for every book I write.

What do you think?  Will “The Man With Too Many Names” fit on one of those teeny tiny pages?  🙂

My previous post was what I call “The Blond Test”.

One day, a blonde woman was car jacked in front of her house and after the thief drove away in her car, the blonde woman ran into the house to find her husband.

“Honey, honey!” she cried frantically.  “I was just car jacked!  My car was stolen from right in front of me!”

“No!” she replied emphatically.  “But I got the license plate number!”

The actual test is somewhat hidden.  You see it goes something like this:

When I was told this joke, some time ago, it took me several seconds to get the punchline.  I am, in fact, a true blond (the fact that my hair, when I had any, was brown, is irrelevant.)

A week or so ago, I told this joke to Michelle who began to laugh instantly.  Michelle is most definitely NOT a true blonde.

And for those of you reeeeeeally blond folks out there, the joke is funny because it was HER CAR.  Of course she has the license plate number and it won’t do the police any good in identifying the thieves…

One day, a blonde woman was car jacked in front of her house and after the thief drove away in her car, the blonde woman ran into the house to find her husband.

“Honey, honey!” she cried frantically.  “I was just carjacked!  My car was stolen from right in front of me!”

“No!” she replied emphatically.  “But I got the license plate number!” 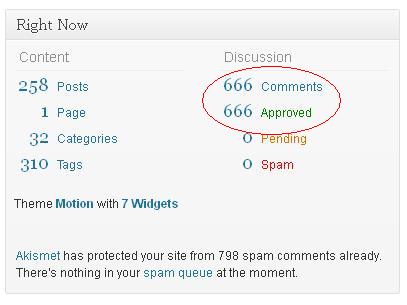 …Though that will come sooner or later…

This post is about hanging out with Lil’B.  I’ve amended our hanging out schedule a little bit and now, I see him every other Sunday afternoon and on the week that I don’t see him on Sunday, we’re going to have dinner on that Monday night.  I have been aware that our every other weekend schedule has been insufficient for him.  I could tell that he wanted more, I’ve just been slow in making that happen.

Last night was our first Monday dinner and I could tell when I picked him up he was excited about it.  He was all smiles and he even dressed up… in fact, I found out later, he dressed up more than I thought.  He borrowed a pair of black fabric tennis shoes from his 19-year-old sister “because all [his] shoes were dirty.”  (Fortunately, they didn’t look particularly like girls shoes.  Amazingly, they fit him perfectly, his toes right where they should have been.)

I was a little bit unprepared so we went to dinner at Applebee’s in Alameda, not too far from our houses.  I plan to take him to all kinds of fun places and explore our neighborhoods and the ones around us.  I want to try to balance exposing him to the neighborhood he lives in with lots of his own culture (he lives in what could be referred to as Little Mexico), but also get him out of the neighborhood and show him other walks of life.  Basically, I want to teach him not to be ashamed of where he comes from, but that there is more to the world and to life than what he sees now.

When I picked him up, I asked him if he had any homework we should bring with us and take a look at.  He happily pulled his math homework (something he doesn’t need any help with) out of his backpack and brought it with us.  In the car I asked him the usual questions:

“What’d you have for lunch?”

“Did you have an afternoon snack?”

“Hmmm.  Well, we’ll see how hungry you are when there’s a menu in front of you.”

He’d never been to an Applebees and he thought it was pretty cool.  He was especially impressed with the fact that the waitress brought him a second Pepsi when his first one was gone, even though no one asked for it.  (I think that’s pretty cool too, but probably for different reasons.)

They fold the kids menu into a little packet with four crayons inside it, which Lil’B thought was pretty cool and he enjoyed the games on it.  He ordered Kraft Mac ‘n Cheese, which was a pretty neet racket, since they charged me $4.99 for what amounted to about a quarter (if that) of a box of Kraft Mac ‘n Cheese which you can purchase at the store for about a buck fifty, but whatever.

When we finished dinner, he gathered his things so we could leave.  He had his homework packet, a pencil and his menu (which he had folded back up into a packet and tucked the crayons away).  He took about three steps and dropped his homework.  He stooped to pick it up and took a couple more steps before he dropped his pencil.  He stopped and picked it up and took a couple more steps and before he dropped the menu packet.  As he stooped and picked that up, I chucked congenially and as I joked, “got anything else you wanna drop?”, I gesticulated wildly, and a ring flew off my right ring finger and hit the wall in front of him.  I’m pretty sure he didn’t catch the irony in that, but I thought it was pretty funny!

We talked about Halloween.  He’s really looking forward to trick or treating and getting lots of candy!  He told me that this year his school instituted a rule for costumes that they can not include weapons and they can’t include blood (too scary for the kindergarteners) so that really reduces his options for costumes.  He said he thought he might be a soccer player.   I was pretty happy with that since last year he was a monster and the year before that he was the killer from Scream that had a pump that made fake blood run down the face.  (Later his older sister told me he was probably going to be a zombie soccer player.  I’m less impressed.)

In the course of that conversation he told me he had never had candy corn.  How is that possible?  At almost ten years old, he’s never had candy corn?!?  I had to correct that post haste, and fortunately, there was a Walgreens in the same parking lot with the Applebee’s.

When we walked into Walgreens they had a display of Halloween decorations, including a Scream guy with a knife in his hand.  You press a button and it lights up, makes a noise and the knife comes at you.  Lil’B pressed the button and jumped when it lurched toward him.  For all his talk about monsters and zombies and stuff, I thought that was pretty funny.

All in all, he seemed to have a really good time, as did I.  The outing seems to have been a great success, which is really good, because I just realized, this may be the most boring blog post I’ve ever written….