For years I have used the idea that it is a bad idea to date within the workplace as an explanation for why I am not involved with anyone.  I am sure that sounds like a leap in logic to many, but the fact is, I don’t meet many new people other than at work.  If I expected to develop relationships of any kind, be they friendships, professional networking, or romantic, where else am I going to find these people besides at work?  Not dating within the workplace is a viable explanation, indeed many will say it’s a good idea…  I think I will count myself among those people.  Many people also see not dating within the work place as an excuse for why I don’t have many relationships.

I broke the rule.

I didn’t even think twice about it.  He caught my eye on the first day.  More importantly, I caught his eye on the first day.  He’s sexy!  He’s funny!  He’s very outgoing and personable!  He was very affectionate, at first at least.  We talked almost every day.  Over the first few weeks we had many, many conversations in which as he continued to reveal things about himself, I continued to check things off my imaginary list of preferred attributes, things I would like to find in a potential mate.  We don’t work together, just in close proximity to each other.  I’m in Facilities and as such, technically, he is my client, but so is every other living, breathing soul in the building.  He hardly ever asks for anything from Facilities and when he does, our relationship holds no baring in the service I provide.  He was reticent, he said, because of the risk of dating in the work place.  I assured him that we were both mature adults and had the capacity to behave maturely and civilly, that there was no law that said that things had to end badly…  if they ended at all.

He continued to hesitate and eventually, I found out the real reason why.  His reasons, I’m afraid, are not something I can share here.  But in all that time, all the things he told me about himself, things he was insecure about, things he thought were negative attributes, things he was sure I would not like about him, in all that time, he told me exactly one thing that I could not live with.  But I was hooked and I was convinced that the one thing I could not live with, would change.  No that I could fix him, or that I could make him change this one thing, but that the one thing would change, organically, because it would be worthwhile to him… because I would be worthwhile to him.

Actually, I paid attention to the actions I liked and explained away the ones I didn’t.  “He’s struggling with the idea.”  “It’s just his background.”  “He’ll work it out.  I did!”  “I just have to be patient.”  In many ways, we have very similar backgrounds and I really do understand a lot of what he is going through.  And then there’s the ways in which our backgrounds are completely different and I have no way of understanding what he’s going through, and the more I look at it the more I realize, he is not trying to get through anything, he is just coasting along on auto pilot.

But I didn’t want to see those things.  I didn’t want to admit that I was the one with the problem.  I convinced myself that I was not allowing the mitigating factors to impact my behavior…  And I’m still pretty sure of that.  But I have to consider the possibility.

You see, I have always known that I was going to be alone.  For the rest of my life, I will be alone.  I don’t like it, but I’ve come to terms with it.  I’m not the dating kind.  And I’m not someone with whom people make the first move.  I never have been.  And honestly?  I don’t even want to be.  Dating is awful.  It sucks and it’s a huge hassle, and it’s full of pitfalls and heart ache and I don’t want to have anything to do with it.  I do want to be in love and I do want to get married (now that it’s finally legal), but I don’t want to go through all the bull shit it takes to get there.  Can’t have one with out the other.  I know that.

No, I’ve always known I would be alone and yet, when this guy came along (it only took 38 years for pity’s sake!), I disregarded that knowledge and dove in head first.  I knew it was a fluke.  I even knew it was very unlikely to be forever, but I allowed myself to believe that it would last for a while; that we’d have some fun together; that I’d have my share of experiences with another person that I can’t have on my own…  And then eventually he would leave me, because, really!  Knowing all that, I went for it anyway.

I am an idiot.

Things were fine for a while, except I’m certain I was in a different place than he was.  I believed he would come around.  I even convinced myself that he was making strides in the “right direction”.  And then I pushed a little too hard and it all came crashing down.

It would take hours and days to tell the whole story.  I’m not even sure I know what the whole story is.  I would imagine there’ll be bits and pieces along the way, but for now, suffice it to say that things with the guy have not turned out as I had anticipated… or even hoped.

It isn’t really a surprise.  I was deluding myself in the first place, believing there was a chance.  There’s never been a chance. 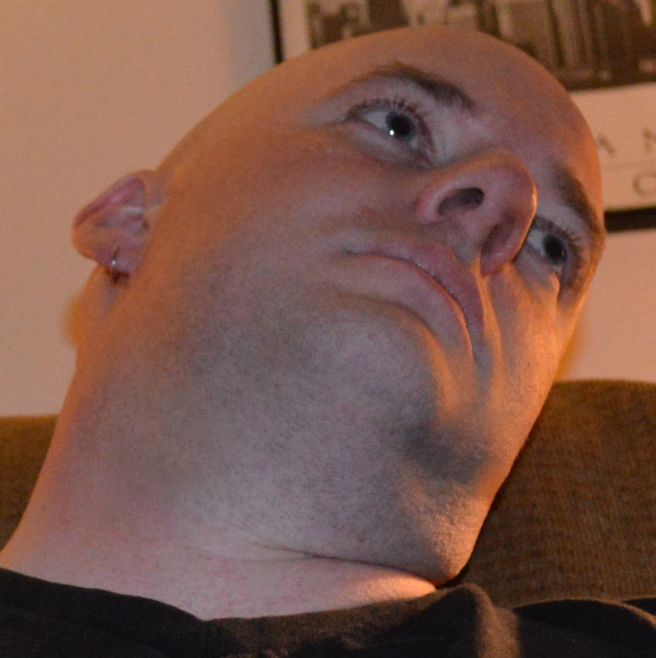 Portrait of a Sucker

I hadn’t really intended to resume writing at this site just to disappear for a month, but the last several weeks have been tremendously, and unexpectedly busy.

My new job keeps me very occupied, which means that, unlike my last job, I have not had any time for messing around at work,  (well…  I say I haven’t had any time for messing around at work…  I have managed to find a few minutes here and there for some “messing around”…  But that’s another story for another time, or maybe not…).  I certainly have not had time for writing blog posts!  On top of that, my evenings and week-ends have been pretty hectic as well.  Making time to write blog posts has been nearly impossible!  When I’m not working, which has been mostly on Saturday’s I’m hanging out with Lil’B, or other friends, or shopping, or whatever…  And when none of that is going on, I’m often engaged in the ongoing text-a-palooza with “A Guy” that has been, in equal parts, ripping my heart out, and showing me a world of possibilities I never believed existed for me.  He is less so “a guy” now, and more so “the guy”, though it’s still really complicated and not without its share of frustration…  But I’m getting ahead of my self and it’s much too late to get very far into that tonight.  Besides, I’m still processing and not sure what or how much to say.  So apparently I’m just a big tease…  But then again so is he…  Er, what was I saying?

There are a lot of things to write about and I really must make the time to get it in, but for now, there’s this…

In the early middle of June, I went one Saturday afternoon to K’s house in Berkeley, for her son’s graduation party/barbecue.  At the end of the party, I was in the kitchen packing up the things I had brought along, when K’s father, in from Arizona for the event, said, “Kevin?  Is that your car out front here?”  I confirmed that it was and he said, “cause this guy just smacked your car!”  Now my car was parked at the curb, at the edge of K’s driveway, with at least 20 feet of open curb between my rear bumper and the corner.  Remember that.  It’ll be important in a second.

K and I ran out to the street to see what had happened as the late-model Honda Accord drove away from the scene.  he drove halfway down the block, turned around in a driveway and then parked his car at the curb.  Seeing K and me standing there, he strolled slowly, and with empty hands, back to where I was standing, behind my car and examining the damage.  The first words out of this guy’s mouth were, “Oh, sorry.  I thought I had enough room to park there.”

I turned around and looked at the expanse of curb behind me and said, “Um, I think you had plenty of room to park there”

We surveyed the damage to my car and it was minimal.  I told the young man, “It doesn’t look to bad.  I’m sure it won’t be too complicated to fix, but I should go ahead and get your information.  Do you know he actually rolled his eyes at me, and then sauntered back down the street to his car to get his insurance information?!?

A week later, I had dropped my car off at a body shop to get the damage repaired, and I was on my way to the Hertz Local Edition lot to pick up my rental car.  When the driver pulled into the lot, I saw it right away.  The car of my dreams…  all most.  They had one white, Convertible Mustang on the lot (I don’t care for white cars, but otherwise it was great!) just waiting for someone to pick it out and drive away.   I was meant to be that someone.  My whole life a Mustang has been my dream car, though I never really thought I would be a Convertible guy.  Since it was an insurance replacement (my insurance policy covered $25.00 a day), they were offering discounted rates.  I don’t know what the Mustang would normally cost, but with the insurance company discount, it cost only $40.00 a day including Taxes.  My portion was only about $15.00 a/day.  When the lady at the counter told me that, I had only one response:  “Why not!  It’s time to kill the dream, anyway!  Let’s go for it.”  I thought the likelihood of it living up to my expectation was pretty low, so once I had driven one, I wouldn’t be so excited any longer.

I picked the car up on Friday morning, and I already had plans to go on a photo expedition on Saturday, with K.  (In April, just before starting my new job, I went to Albany, NY to visit my sister and her family, finally getting to meet, not only the new baby baby, but also, the nearly three-year old I hadn’t gotten to meet at that point.  Before going on that trip, I bought a fancy pants new digital 35 millimeter camera and I’m itching to learn all of its secrets.)  Naturally, while we were out, I had to have some pictures of the Mustang.

The Mustang which did nothing to destroy my dream!

I had that car for a week five days, three of which were rainy, which I thought was completely unfair of Mother Nature.  The rain tapered off on the third day, but it was still a bit cold.  I didn’t care.  I had a Mustang for only a few days.  I was not about to lose a single precious moment in that car!

At the end of the week, I did not want to give it back which meant…  There was only one thing to be done:

SOME dreams do come true.