Some people say that Holiday’s like Christmas are all about giving.  “‘Tis better to give than to receive,” and all that hooey.  I have very mixed feelings about the gift giving holidays.  I want to get presents.  Let’s be honest, don’t we all?  I think anyone who says, “I don’t care about receiving presents.  I just like giving things to people and watching their faces light up when they open the package,” is lying through their artificially whitened teeth.  (I don’t know why the teeth are artificially whitened, that’s just the first thing that came to mind and we’re going to go with it.)

I like to GET presents, but I HATE to give them.  I do.  It’s not because I’m stingy or selfish.  I’m not.  I do like to give people presents that they genuinely enjoy and appreciate.  There is a commercial that keeps playing on the radio right now: I think it’s for Roku (Obviously not a very good commercial because I had to try six different spellings, “Orocu, Orokoo, Arocu, arocoo, etc.” before I actually found ROKU with no O or A in front of it.)  The commercial says something about knowing the different between genuine appreciation and fake appreciation when you give a gift.  I?  I get the fake appreciation most of the time.

I don’t usually try to give people gifts that will blow them away.  I don’t make any sort of effort to surprise people, because I suck at it.  I ask people “What do you want?” and then if I can afford it, I give it to them.  If I can’t afford it, I ask, “What else?”  I hate it when they tell me, “I don’t know.”

One year, when I was about fifteen, my mother decided, seemingly on the spur of the moment, that she was going to give us something for Christmas.  She ran out on Christmas Eve, in search of some kind of gifts for her children.  The next morning, after we had our traditional Pillsbury cinnamon roll breakfast, we each opened a small package with our name on it.  Each package contained one embroidered dish towel and one pot holder…  with Santa Claus on them.  Again…  I WAS FIFTEEN.

Last year my mother sent me a green t-shirt with a giant Grinch face screen printed on it.  She couldn’t have known by looking at the shirt that the dastardly smiling mouth on the shirt only serves to highlight my much maligned and despised gut.   I also don’t appreciate being referred to as “The Grinch”, which is what she calls me when she’s not calling me Scrooge.  I never have and never will wear the shirt out of the house.

Last week I received a text from my mother:

“I’ve ordered you some Christmas goodies from Harry & David.  Don’t know when they’ll arrive but be on the lookout.”

By chance I came home that night to a box on my front steps.  I opened it up and found a metal tin inside with three different flavors of Moose Munch.  If you don’t already know, this is Muse Munch: 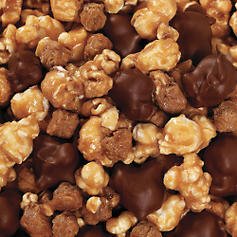 And these are my teeth: 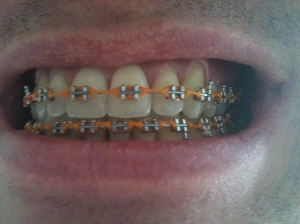 Give or take a few months and a different color rubber band.

I texted her, “This is some awfully mean stuff to send a guy with braces.  😉  Good thing they’re coming off soon.  :-)”

“I completely forgot about the braces!” she told me.

I answered, “It’s OK.  They’ll be off in a few weeks.  That stuff will certainly keep.  Thanks for sending it.  Should be tasty.”

She asked, “Did you get both boxes?”  I told her I only got one.  “The other one will be a little more braces-friendly, I think.”

The next day a second box appeared on my steps.  “This box has air holes…” I texted to her.  “Did you send me a puppy?”  This box had six pears, a small bag of mixed nuts and a block of cheese.  (See the picture of my mouth above.)  I’m not particularly fond of fresh pears, though I don’t know if it’s realistic to expect that she ought to have known that.

It’s clear my mother doesn’t know how to give good gifts, though certainly she means well.  I wrote yesterday about all the pressure, expectations,  and demands on holidays and this is just part of it.

I’ve been thinking, these last several days, about gifts and how I feel about them.  There was a time when I bought into the addage, “It’s the thought that counts” only, I don’t think I believe it anymore.

I’m fully prepared for the one person who actually comments on my blog with any regularity (and the one person who just has to talk to me in person about it because she’ll explode if she puts her thoughts down on the blog instead of – or maybe in addition to – talking to me about it in person) to give me all kinds of grief over this, and that’s okay, but just hear me out.

I have so much stuff.  Way too much stuff really.  I don’t need more stuff.  And I’m beginning to feel like gifts for the sake of gifts? are just stuff.  It’s stuff I can’t throw away, or give away or return, because if the giver catches wind that I got rid of his gift so that it won’t be just stuff, the giver will get his feelings hurt.  The thing is, if the giver gave me a good gift, then it wouldn’t be just stuff it would be something of value, something I might treasure and therefore, would not get rid of it.  I’m coming to a point where I feel like, if  I don’t need, or didn’t already really want, the item the giver is giving me, it’s actually a burdon.  And because I feel this way, I feel very ambivilant about giving gifts because I don’t want my gifts to be seen that way, and so I’m just adding to the pressure on myself to give good  gifts so that they won’t be just stuff and I’m no good at it.

I’m not sure, now, where this post was going to go, though I’m certain it was a very different direction.  What I do know, now, though, is…

I think that’s what I’m going to do from now on.

If everyone who was going to give me a gift, just gave me money instead, maybe I could pool all that money together and spend it on something I really wanted, like an iPad or a new television instead of a box of pears and a —  Well, I don’t know what else, because I really only expect to get one other gift and I have no idea what it will be…  probably Glee DVDs.

Apparently, Michelle was going to buy me a new printer since the one I had doens’t work with my new-ish computer…  But I bought myself one on Saturday so now she has to come up with something else.  Way to go, me!  But in “me’s” defense, Michelle stood right there and watched it happen and didn’t say anything until we got back to her house with it.  She could have stopped me.

OH!  I know where I was going with all that!

I’ve been struggling for the last several days with the idea of gratitude and appreciation vs. expectations and dissappointment.

When I opened the box of Moose Munch, I was dissapointed that my mother sent me what amounts to caramel corn and chocolate chips.  (You Moose Munch enthusiast can just back-off.  I’ve never had it and I can’t eat it for at least another two weeks and probably six.)  It’s food.  She sent me food for Christmas.  I can afford to buy my own food so this didn’t fill a need.  A quick glance at the Harry & David website tells me she probably spent close to $30.00 on this caramel corn and chocolate chips.  Plus she sent the pears and cheese.  Another $40.00? At least it is food and will go away.  It’s not just stuff.

On the other hand, there were lots of years when she didn’t give me anything.

So I can’t help but wonder…  Am I making too much out of this?  Is it really “the thought that counts”?  Am I just ungrateful?  Is it my own fault for having too high expectations when I find out someone sent me anything at all?

Then again, it occurs to me that since I can’t remember any of the gifts I did get when I was a kid, and more often than not, I can’t remember a few months later what I gave anyone or what anyone gave to me…  Maybe it is the thought that counts…

By the way, the pears are awesome, much to my surprise.