It’s just come to my attention, that while I’ve talked about my tattoos in the past and that people have asked me about them before, I’ve never actually posted pictures of them (except for the panther, as relates to my roadrash from May.)

So with that in mind, and given that I’ve not thought of anything else particularly interesting, I give you the not terribly interesting story of my tattoos:

Several years ago now, my friend Michelle and I were at Six Flags Marine World (it’s now known as Discovery Kingdom) for an o’dark thirty live broadcast of my favorite morning radio show in celebration of the fourth of July.  Up to this point I had alway held on to my steadfast belief indoctrination that tattoos were evil and only heathens and ingrates have them.  I never had any use for them, and I didn’t see the point in getting temporary ones that represent the same evilness that permanent tattoos represent, and that are just going to wash off anyway.  Michelle on the other hand, had gotten temporary tattoos a few times, just for fun.

I don’t know what changed this time around but when we walked past the airbrushed tattoo cart in the park, I looked at the offerings with Michelle, rather than standing back and giving her a condescending stare.

After a minute, I decided to go for it and got a fairly generic  black panther tattoo painted on the back of my left calf.  When it was over and we walked away, Michelle looked at it and said, “That’s cool.  It would be cool if it were real.”  I laughed at her and scoffed at the idea.

But I looked at it several times while it was still in tact and the more I looked at it the more I liked it and didn’t want it to fade away.  I started looking at designs wondering if I could ever really do that to myself, thinking this was never really going to go anywhere.  But the more I thought about it the more I wanted to do it and the more I could imagine it being real.  A friend of Michelle’s told her of a place in Vallejo, California where she had gone and gotten a tattoo.  Her tattoo was, apparently, very good and wasn’t terribly expensive.  Two important factors in my mind.

We checked the place out and at first I was a little put off.  It’s a rundown shop with every wall covered with tattoo “splash sheets” (go figure, what did I expect to find?)  There were some really raunchy, horrible tattoos on the walls, but I realized that’s to be expected and I just looked the other way.  After a couple of visits and conversations with the owner, I decided to bite the bullet.  He set me up with a young, but talented artist he said was his best guy.  One Saturday afternoon five years ago, I went to the shop, nervous as heck and shaking a bit, but determined to see it through, and I left with this on the outside of my left calf: 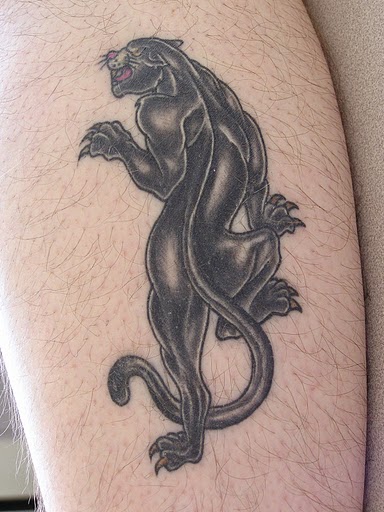 I have to admit that it was an incredible experience.  It wasn’t nearly as painful as I imagined it would be.  Don’t get me wrong, it hurts, but it’s not like you expect and when it’s over, like so many things, you don’t really remember the pain so much, and you’ve got something to show for it.

K told me that people would ask me, “what’s the significance?” and I needed to have an answer.  She turned out to be right.  At my Grandfather’s 90th Surprise Birthday party a few weeks later, my cousin asked me what it meant and I told her it didn’t really mean anything, I just liked it and wanted to get it.  She said, “Panther’s can be like, a sign of power.  Just tell people that.”

As I said, I was hooked, and about 18 months later, I went back to the same shop, to the same artist with an idea.  It was Saturday afternoon.  He asked me when I was thinking of getting it and when I told him I wasn’t sure, he told me that Friday was his last day because he was moving away.  In retrospect, I might have waited if I’d thought about it.  When it healed it needed to be touched up and he wasn’t around to do it, but I liked his work and I wanted the ink so that Friday after work, I went back and I left with this on the inside of my right arm, just below the bend in my elbow:

Recently, my doctor asked me to do a fasting blood test and as the phlebotomist was sitting there taking my blood she studied the tattoo.  To be fair to her, she was sitting to my right and I was facing to the side.  She saw my tattoo from the left side of this picture.  She complimented me on the tattoo, said the colors were pretty and then said, “It’s a turkey?”  Um….

A good two years past before I got another.  I was jonesing for a long time and even after I knew what I was going to get I didn’t know where to go.  Permanent ink on your body is not something you want to let just anybody do.  You want someone who does good work and it’s usually good to have the recommendation of someone who’s already been.

Finally, I found a place not far from my office with a guy who had done some good work for someone I knew.  I bit the bullet again and went in.

This time, Michelle’s sister Monique wanted to come and watch.  She claims she wants a tattoo, but she’s scared.  She thinks the pain is going to be unbearable.  I told her to come along so she could watch the process and see how I do.  I sat calmly under the needle and waited while he applied the ink.  I winced a couple of times, but not because the application hurt so much.  It did hurt, but not terribly.  The guy who did my third (but not final) tattoo was clearly hard of hearing, from head banging or spending so much time with a tattoo gun in his hand, I do not know.  He tended to shout and more than a few times his loud voice, mere inches from my ear, hurt my ears far more than the needles hurt my skin.

He was kind enough to touch up the black parts of the second tattoo while he was working on me and when the session was over, I had this on the back of my neck: 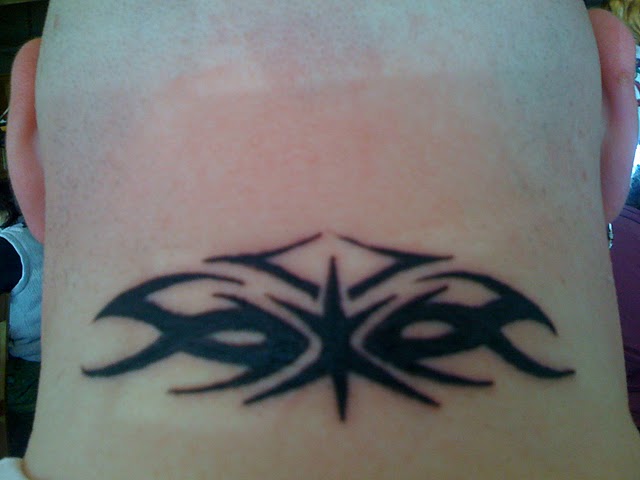 No comments about my shaved Ogre-head!

Now the problem is, it’s been two and a half years since I got that tattoo and I’m jonesing for another one.  But I have no idea what I want.  I want something with lots of vibrant color in it, but that’s about as much as I’ve figured out.  So that’s where we stand; itchin’ and clueless.  But I’ll think of something…

I’m thinking in terms of getting something to commemorate losing 100 lbs or hitting a weight/physique I’m happy with.  I’m also thinking of getting something to represent my new life once I’ve finished school and change careers, but since I’m not sure what that’s going to entail or when it’s going to happen, I have not yet decided what I would get.

Feel free to leave your suggestions in the comments below!