I’m sitting here, briefly catching up on Twitter before I finish up my final this-must-be-done-today-because-it’s-for-tomorrow-morning task of the day because clearly my priorities are firmly planted right where they should be… ahem.  Anyway, I’m giving it all a quick once over when I see this from my local ABC News Affiliate:

Sounds pretty exciting, right?  I like airplanes.  Love to fly.  Once upon a time I thought I might like to be a flight attendant except I was always too fat and for many years, until I learned the secret, I experienced severe pain in my ears during descent.

Still the story sounded pretty exciting and we all know I thrill for disaster and mayhem (thought it may come as a surprise that I like near misses even better!)  So I clicked the link and looked at the story and didn’t even get past the first sentence before I was disappointed with the anti-climactic story.  Well not so much the story as the billing for the story: 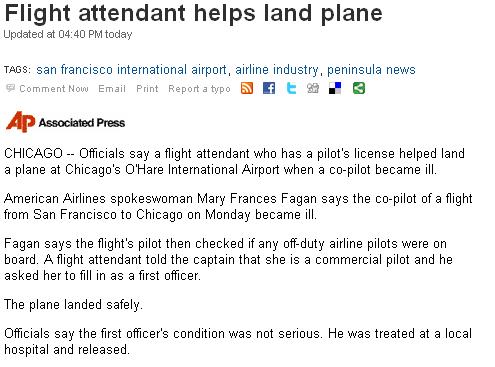 I mean, really.  It’s great that the flight landed safely and all that.  Really!  I wouldn’t want it any other way, but for crying out loud, it might as well have read, “Pilot subs for other Pilot.  Plane lands.  The end.”

This has been a day for Anti-climactic-ism.

Earlier today, Michelle popped up on my computer screen on Yahoo! Messenger saying:

She’s kind of slow sometimes with my humor.