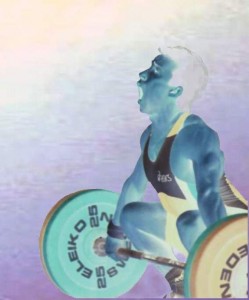 Last Monday marked my final day of Personal Training for a little while.  I’m disappointed for sure.  I liked having the help, and the accountability is more helpful than you can imagine.  With someone waiting for you at a set time and day at the gym, it’s a lot harder to blow it off.  With someone telling you how many of which exercises you’re supposed to do, and not feeling sorry for you when you whine and whimper, it’s harder to slack off once you’re there.

Of course, there were some draw backs as well.  Tawaiin’s measure of my success was my weight and measurements.  There’s a whole elaborate set of measurements that they take every three weeks to track your progress.  I suppose that makes sense from a tracking standpoint, but it didn’t matter to me, weight loss wasn’t my primary reason to be there, and toward the end, I found that I was dreading going on the days that he would take my measurements.  My goal was to get stronger, have more endurance.  I’m not sure about the endurance, just yet, but I definitely got stronger, even just working with him one day a week.

Of course, I see a difference in how I look.  My waist is slimmer, my chest is less “moob”-like (that’s man boobs for anyone who doesn’t know.)  There is the slightest of diagonal lines running from my collar bones to my armpits and slightly less slight diagonal bulges running around the outside of my upper arms.  This is good.  I wouldn’t dare say I’m looking buff, far from it.  But this is good.  Imagine what I could have accomplished with twice a week sessions… or, you know, working out any other day of the week.

I couldn’t afford to see Tawaiin twice a week, and sadly, I never really learned how to work out on my own.  For the last month or so, I only went to the gym on Monday’s.  Not getting my money’s worth and not getting the maximum impact.  Nonetheless, I lost twenty-eight pounds; I don’t know how many inches; and four or five percentage points in “BMI”.  When I started, I was fully entrenched in the ”NOT HEALTHY” section of their chart.  On the last night, he took measurements and I was .01% below the “NOT HEALTHY” section in the “Acceptable” category.  I would have to lose another ten percent to fit into the “Fit” category.  I don’t know if that will ever happen.  I did build some strength and endurance, and for that I am grateful.

A few years ago, I signed up for a program through Men’s Health Magazine called The Abs Diet.  I really liked it because it took all the guesswork out of everything.  Computer generated, but fully customizable, weekly meal plans, daily work-out routines ready and waiting, progress tracking all right there on the website.  It was great.  It is for a fee, but it’s a pretty reasonable fee for what you get (about $15.00 a month.)

One of the new features since I last signed up for the program is a support section, a community of users in a forum and a personal journal which can be kept private or made public… Kinda like a blog.

Anyway, I wrote this, this morning and frankly, I don’t think I can sum things up any better than I did:

Yesterday was my first day of my second go round with this diet.  I did the Abs Diet for several months a few years ago.  I liked it and did fairly well with it without going crazy with every little detail.

I really enjoyed having the meal plan laid out for me without having to put much thought into it.  Each week, I printed out a detailed list of meals and a grocery list to accommodate those meals and, bam!, my thinking was done for me.  The part I struggled with was the exercise.  I never really knew what I was doing and my resources were limited.  I lived in an apartment complex with a gym, (now I live in a duplex) but it was a somewhat limited space and in the evenings it was too crowded to be able to make use of it.  I tried to make it in the mornings, and I did for awhile, but it was tough – I’m not a morning person.

(Full disclosure – I was also drinking pretty heavily and it was tough to make that fit into the plan and get up early enough in the mornings to work out.  Now I don’t drink at all, but I’m still not much of a morning person.)

I went on a two week vacation to visit extended family and didn’t work out a single day while I was away and I just never managed to get back on that horse when I came home.

I started that go round at nearly 290 pounds.  The lowest weight I remember seeing on the scale before I gave up was 254.  My weight climbed slowly – or rather, I thought it was slowly – and I was distressed but never motivated to do anything about it.  For the next three years my weighted fluctuated back and forth always climbing a little higher before coming down again and at my worst I was up to 309 pounds.

Through paying closer attention to what I was eating, eliminating Alcohol from my life and trying to be more active in general, in my daily life, that number came back down to about 288 pounds.

Last year, I decided I wanted to consider a career change and become an Emergency Medical Technician.  The field fascinates me and I’ve got some work experience that lends itself in that direction.  I looked at what they have to do, and I looked at my own condition and knew that physically, I can not do it.  I can’t lift the amount of weight an EMT has to lift and I don’t have the stamina to do a physical job all day long.

In October, I joined 24 hour fitness.  In November, I signed up with a personal trainer.  I worked out with him once a week.  I would have liked to do more, and he wanted me to do more, but it was simply too expensive to do more than once a week.  I’ve gotten own to 265 pounds.  Last week was my final session before the funding ran out.  I couldn’t afford to go back again.  I want to go back as soon as I’m able but it’s insanely expensive and I really don’t know where I’m going to find the funding to pay for it.  And then I remembered the Abs Diet.  I remembered the step by step outlines of what exercises to do and what food to eat and everything.  So I signed up again.

Yesterday was the first day.  I printed out my meal plan and my work out plan and set about making it work.  It was a little tough. I’m a big brother and I spend Sunday afternoons with my Little.  We went to a miniature golf/go kart/arcade/etc center.  Fortunately, food never entered the equation yesterday, but it was five hours out of the middle of my day and I didn’t manage to fit my afternoon “snack #2” into the day.  I went to the gym in the morning, later than I had wanted to.  I thought if I could get there early enough, the weight room wouldn’t be terribly packed and I could figure it out.  I realized, only after I got there and started reviewing the paperwork, that I really didn’t have a clue what I was doing.  The machines all look like medieval torture devices and there are limited, if any, instructions.  I ended up faking most of the exercises using the Nautilus type equipment at the other end of the gym that no one wants to use.

I know that I was better off using that equipment than not doing anything at all.  I also know that a leg press is not the same as a squat and that I won’t get the same results by doing different exercises than what the program prescribes.

I like today’s prescription.  Walk for 45 minutes?  I can do that.  That was always my favorite part from the last go round too…  I’m hoping that tomorrow, I can get into the gym super-early before work and fumble around like an idiot with some of the torture devices– er, weight machines and figure out what the hell I’m doing.

I walked in there yesterday telling myself not to worry about the other people and what they might think looking at me as I screwed everything up, but apparently, I didn’t listen.  I know that if I can just acclimate myself to how it all works, I’ll be fine.  It’s just the acclimating that’s proving to be difficult.  Here’s hoping for a better outcome tomorrow.

3 thoughts on “Here We Go Again”