I’ve essentially been unemployed since last October.  I work two very part-time jobs bartending with catering companies, but I never earn a lot with those jobs.  It’s never enough to off set the unemployment money I’ve been collecting, it just makes that money stretch a little farther than it otherwise would.

My last cat, Mischa, died in October 2012.  It was really hard on me and it took a long time for me to even be interested in animals.  When I went to visit my sister and her family in April, 2013, I never once touched their very sweet and tolerant cat.  This fact occurred to me only as I was on the plane flying home from my week-long visit.  It was not like me not to want to touch and pet the cat as she passed by.

At some point during the year or so that followed, my pain at the loss of my best friend of over twenty years lessened and I began to consider having a new animal in my life.  I was somewhat torn, however.  I’ve always been a cat person.  I really like them and I find them to be quite enjoyable.  I feel that anyone who says that cats are assholes (and I’ve heard lots of people say that), simply do not understand cats personalities.  Mischa was a fairly good mix of independent and loving.  Like all cats, he groomed himself.  I didn’t need to bathe him.  When he was hungry he helped himself to his food bowl.  When he was thirsty he got himself a drink.  When it was time to potty, he took care of his own business with no assistance from me.  My only responsibilities were to replenish his food and water bowls every morning and keep the litter box sifted.

The problem is, Dogs require a lot of attention and work.  They need to be bathed periodically.  They need to be walked several times daily and often at inconvenient times.  And they must be entertained, all. the. time.  I liked the idea of having a dog.  We had a family dog when I was a teenager.  Well, I say she was a family dog.  She was supposed to be a family dog.  She ended up being my sister’s dog.  Dogs are like that.  They pick one person and the rest of the family can hang for all they care.  (Really all animals are like that, but whatever.)  Life with this dog was much simpler.  Since my sister was her person, my sister “got” to do all the baths.  Feeding and watering was a quick twice-daily activity once before school and once at dinner time.  We lived in a suburban area, in a house with a back yard.  When it was time for the dog to take care of her business, we just let her out the back door and that was that.

But see, I live in a more urban environment without a fenced-in yard to just let a critter run around in.  Walking a dog, for me, would involve roaming the neighborhood side walks, carrying a plastic baggy to retrieve said business.  I’m not a morning person, and when I’m working full-time, I’m often rushing to get out the door and get to work “on time”.  I’m also a night owl who has a bad habit of staying up too late to “just finish one more show in my DVR backlog” and then wanting to go right to bed.  Much of the time I have to really force myself just to brush my teeth and put in my retainers.  Having a dog would mean having to go for a walk before I leave for work, no matter how late I’m running.  It would mean having to go for a walk before I can go to bed, no matter how late I’ve stayed up, or how tired I am.  So I was on the fence.

On Sunday, June 1st, at 9:40 am I received a text from my downstairs neighbor.

Found a stray kitten in the back yard.  Can’t keep him.  Interested in checking him out?

I had no intention of taking in a new pet.  I still don’t have a full-time job.  I don’t need the expense of getting a new kitten all up to date with medical stuff.  I was in the process of saying as much in a reply text when this came through. 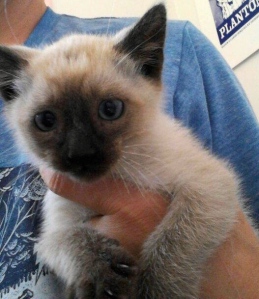 My neighbor is evil.

I went down to talk to her.  I wanted to know more about the situation.  I had actually heard kitten meows from my bathroom window and I really thought there were a couple of them out there.  It turned out what I was hearing was this poor little guy in their bathroom where they had closed him up to keep him away from their other two cats.  But here’s the thing, while I was in my neighbors bathroom with her and the kitten and talking about the situation, she kept calling him “Blue Eyes” for obvious reasons.  Every time she called him that, I thought of Frank Sinatra and his nick name “Ol Blue Eyes”.  Then I thought “Frank Sinatra would be a cute name for him.”

Here’s a little pro tip for you.  If you have no intention of adopting an animal, DON’T NAME IT. 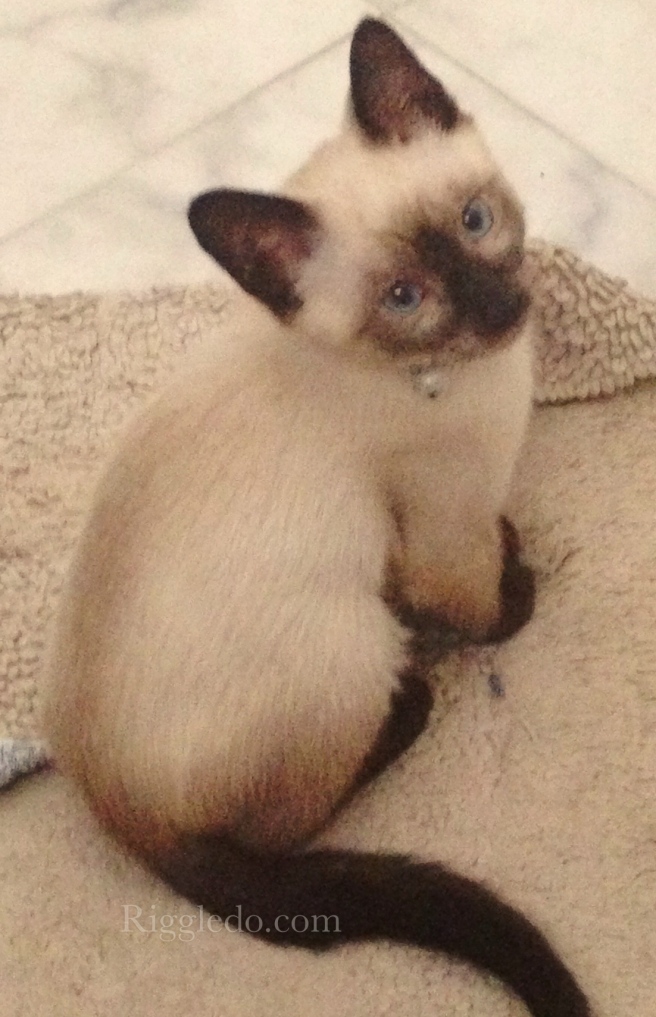 This is “Frank Sinatra”, but his friends call him “Frankie”.  Frankie is currently about ten weeks old, which according to most conversion charts is the equivalent of about three to three and a half years old.  In other words, he’s a bit of a holy terror right about now.  But he’s a pretty darn cute holy terror.

Bwahahahaha!  Yeah, right!  If you’ve been reading this blog long, you know “short and sweet” isn’t really my thing.  But I’ll try.  I don’t have a whole lot of time for this.  (You like how I waste precious moments of my time, explaining how I don’t have much time?)  Anywhoo…

I’ve been so busy, and there are so many things to catch up on that I hardly knew/know where to begin, and with limited time for writing, I’ve been unsure of what to say to convey my current circumstances with brevity.  Things are pretty stressful right now and I’ve needed to spend just about every available computer time minute looking for and applying to jobs.  I’m still not working full-time, nine months since I was unceremoniously “released” from my previous full-time job.  I can’t say that the nine months haven’t been nice, ’cause they have!  I’ve loved having so much free time to do whatever I wanted.  I’ve loved being able to go about my day free from pressure to keep a certain schedule, or satisfy someone else’s demands.  I’m starting to see why self employment might be so attractive to so many people, though, in many ways self-employed people work a lot harder than the rest of the employed population. But the fact is, my money is running out and if something doesn’t come together pretty damn quickly, I’m going to be forced into some really difficult choices, none of which are pleasant.  By the end of August, if I don’t have a new full-time job, I’m going to have no choice but to move out of my apartment.  On September 1, I will have lived here for seven years.  I’m ready for a change and I do actually want to move, but I want to move someplace of my own choosing, under my own steam and without pressure.

If I’m not gainfully employed by the end of August, I’ll have no choice but to either move in with a friend (my options are extremely limited) or move out-of-state and live with a family member.  And again, my options are limited and very unattractive.  Moving away from my current life is the worst thing that could possibly happen to me right now (or very nearly – God forbid I should be accused of exaggeration…).  I have a lot to lose right now, if I have to move away.

Next month will mark the fifth anniversary of my match/friendship with L’il B.  He is 12 years old now and things are getting really interesting.  We had a conversation earlier this week in which he learned that Big Brothers and Big Sisters only serves kids from 6 to 16 years old.  He asked me, “So when I’m 16 you won’t be my Big Brother any more?”  I said, “I told you a long time ago, I will be your Big Brother for as long as you will let me.  But no, we won’t be supported by the program any more.  We’ll just be friends.”  It was just a little “throwaway” question from him, but it was clear that our relationship means a lot to him and he was bothered by the thought of losing it.  This is one of the reasons that I do not want to move away right now. I made a commitment to this kid and I want, no, I NEED to see it through.  Yes, moving away because of financial ruin, is a far cry from just dropping him from my life, but it still matters to me.

I’ve met a really great guy.  We’ve been dating for about seven weeks now, and while it’s still new and I don’t know what’s happening, or going to happen, we’ve been having a really nice time getting to know each other and spending time together.  He seems to be really sweet and kind.  He’s very intelligent and independent.  He has strong morals and isn’t afraid to share and stand by them.  Oh, and he’s really attractive.  🙂

Realistically speaking, it has only been seven weeks.  If our relationship were to end now, it would not be devastating.  I would survive and move on with my life.  BUT, I really like him a lot.  He seems to like me as well.  I have no sense of dishonesty in him.  Whether this relationship will turn to love remains to be seen, and it very well may not.  I could write a whole separate, rambling post about what love is, what it means to be in love, and how one knows when they are experiencing love.  I might sometime.  But for now, it’s enough to acknowledge that we are not in love, we just like each other, and are attracted to each other, and we’re each interested enough to continue to see each other and find out where that takes us.  The point, though, is that I’m interested enough, and like him enough, that I really do not want to have to move away and end this relationship right now.

I have been interacting with a representative from a local staffing agency which I have worked with before and I am hopeful that sometime next week I’ll hear from that representative to either send me on some interviews, or set me up with an assignment (preferably long-term, temp-to-hire, or even direct hire) to do some customer service work.  It’s not exactly in my wheelhouse, and probably won’t pay as well as I’ve been hoping, but it is more than nothing, and more than unemployment which is pretty much all I have going on right now.  Things will be tight, but at least it would keep me afloat, and at this moment, that’s what’s most important.